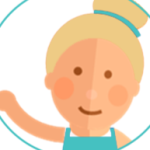 A Guest Blog by Helen Charlesworth

“So, this week has mostly been about settling in the new baby and refereeing the toddlers. The settling in the baby was the easy part!
At various points this week, I have felt like a football referee having to step in between two feuding players! They know full well what they are doing. All these people that say toddlers don’t know the consequences of their actions – mine full-on do!

Example – one toddler is sitting on the little sofa with the doll carrier on it next to her. The other toddler decides he NEEDS to sit down on the sofa too, even though he was perfectly happy standing elsewhere. He walks over but the child on the sofa doesn’t want to move her baby. I instruct her to do so. She gives me a death stare but does it. Other toddler sits down. For all of 5 seconds! Then walks away. Toddler on the sofa places the doll carrier back on the sofa. Other toddler comes back again, despite having been happily playing with the Paw Patrol toys elsewhere. And so this cycle continues, until at last a truce is called. Well, not exactly. It was breakfast time and I called to them. The distraction of food was too much to resist!

Of course, possession of an item lasts from when the child has first touched it in the morning to when they leave at the end of the day. As long as they have played with it at least once, it’s theirs. All I hear all day is “My buggy”, “My baby”, “My car” etc. I sometimes respond with “Actually, it’s Helen’s and you are playing with it”. But then I think that makes me, at 44 years old, sound as bad as them. So instead, we encourage the taking of turns and sharing. The sharing notion is fine, when they want something. So you hear lots of “Share” whilst they are also snatching the toy off another child. The word share has been as overused in my house this week as the word Brexit has in the news!

Other things they have argued over this week – who is going in the front door first (it will be me as I have the door key!), who is going to have their nappy done first (trust me, the one with the poo is always going first!), who can get their shoes on quickest (on the wrong feet also counts apparently!), whose mummy has gone to work (all mummies are at work!), who can sing the loudest (only one winner on that one and I don’t mean me!), who has drunk the most of their drink (fine for the ones in nappies, not so ideal for the potty training one!) etc, etc. You get the idea!

As for the new baby, she only argues with going to sleep, having her face wiped (she sounds like I am murdering her!) and sitting with us while we do our shoes (she prefers instead to crawl into the kitchen where she isn’t allowed or all the way back into the playroom!).

Next week should be marginally better…….but only because one of the main instigators is on holiday!! How am I, as a grown adult and professional childcarer, relishing a 2 year going to Butlins as being a plus point to my week? Haha.”

Who else can relate to Helen’s day? Get in touch to tell us all about your day in the #LifeOfAChildminder